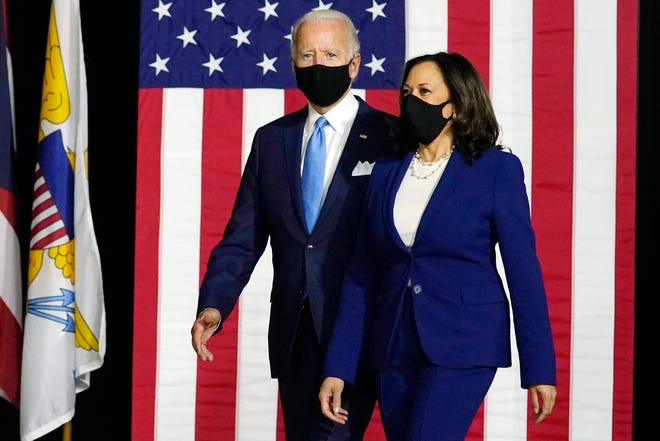 The world will be watching Delaware this week as the Democratic Party officially nominates Joe Biden as its candidate for president.

While Biden has brought moments of tremendous consequence to his home state several times over the past 12 years, his acceptance speech Thursday at Wilmington's Chase Center likely will become the most significant.

It also will mark the beginning of what is certain to be a vitriolic, final three-month stretch for the race to become the leader of the world's most powerful country, which today is suffering under a pandemic, high unemployment and racial turmoil.

Biden's vice presidential pick, California Sen. Kamala Harris, tore into those themes on Wednesday while giving her first public speech since joining the Democratic ticket. Amid a string of attacks, she blamed President Donald Trump for what she said was inflaming or ignoring the country’s current problems.

Trump, she said, is "the reason someone dies of COVID-19 every 80 seconds," referencing the roughly thousand daily deaths from the virus in the United States in recent weeks.

The day before her speech, Trump posted a video to Twitter calling Harris a phony who is part of the "radical left."

Underneath the political rhetoric lies real policy differences between the candidates, particularly about the role the United States should play in what had been an increasingly interconnected world.

Delaware will be at the center of those differences on Thursday when Biden officially accepts his party’s presidential nomination.

While Democrats originally planned to hold the entirety of their convention in the key swing state of Wisconsin, the coronavirus transformed most of those festivities into virtual events.

Nevertheless, supporters and protesters still are expected to gather outside the Wilmington convention center for Biden’s in-person speech there, as well as for Harris’, which will occur the day before on Wednesday.

Dozens of other key Democrats and one Republican will give virtual speeches for the convention, which will be aired on national television. Two Delaware members of Congress, Sen. Chris Coons and Rep. Lisa Blunt Rochester, will be among those giving prerecorded speeches.

Coons said Biden’s decision to hold a largely virtual convention shows he “respects scientists and public health experts who caution sharply against any such gathering.”

The comments likely were made to contrast Biden with Trump, who has held large campaign rallies in recent months despite the pandemic.

“This is his moment,” Coons said. “But he’s chosen to swear off the balloon drops and the great big cheering crowds in the interests of helping us end this pandemic faster.”

During Biden's four decades as a U.S. senator, he rarely faced challengers who posed serious threats to his seat. His political path to the current moment followed a career known for negotiating bipartisan bills around criminal justice, banking and women's rights.

In recent years, he has disavowed some of that past work as his party has shifted leftward. While Biden – and his supporters – point proudly to the Violence Against Women Act, which he sponsored in 1990, other legislation has been criticized by Democrats.

Those include numerous bills that increased funding for policing and increased penalties for drug use, including legislation that imposed stiffer prison sentences for the possession of crack than for powder cocaine.

While Democratic challengers on the left picked apart that record, party voters ultimately swung hard for Biden after his initial losses in states, such as Iowa and Nevada.

Many expect an even bigger wave of scrutiny of Biden’s record as the presidential election nears, and some key Republican leaders in Delaware say they welcome it.

They say Biden's ascendance to becoming the nominee for U.S. president will bring a reckoning to the way the state has conducted its politics.

“I was always supportive and encouraging and hoping that Joe Biden would become the Democrat nominee because all eyes would be on Delaware, the Delaware Way and Joe Biden,” said Rob Arlett, Delaware state chairman for the Trump 2020 campaign.

The Delaware Way means different things for different people, Arlett said. What’s implied is that everyone gets along and focuses on working across the aisle and not being partisan as lawmakers serve the people.

“However, what I’ve learned to be the new Delaware Way ... it means to shut your mouth, do what you're told and don’t rock the boat,” he said.

Arlett said he is not the only one saying this. He pointed to Delaware’s “F” grade in the Center for Public Integrity’s 2015 State Integrity Investigation. The organization said Delaware’s problematic areas were in its public access to information, accountability by the three branches of state government, lobbying disclosure and ethics enforcement agencies.

Many believe Republican opposition research is ongoing in Delaware. But it is unclear if it may impact Biden’s campaign.

"I think in Delaware everybody is perfectly pleased to put on their blinders and say, 'We've known Joe for all these years and what a good guy,’” former state GOP chairman Charlie Copeland said.

With an opposing view, Democratic state Senate candidate Sarah McBride, who previously worked for the late Attorney General Beau Biden and the Obama White House, said the eyes on Delaware will give the world a glimpse of the “intangible qualities of this state that we love.”

“And that connectedness, those relationships, they’re part of it,” she said.

After crime outbreak, police are silent on key details in Wawa carjacking arrests