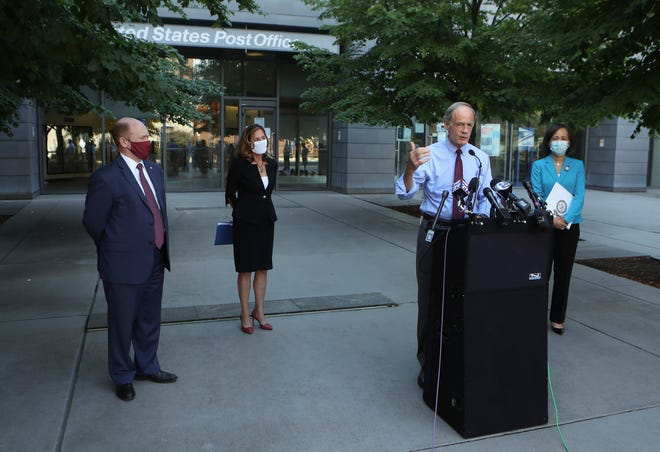 Delaware officials will sue the U.S. Postal Service amid claims President Donald Trump is starving the agency of funding as a reelection strategy to suppress voting.

On Tuesday, Delaware Attorney General Kathy Jennings announced her office will be suing alongside several other states in federal court later this week. The lawsuit will assert that recent changes to the Postal Service were implemented illegally and infringe on Americans' right to vote.

"This is not just a crisis; it is sabotage," Jennings said of recent changes to the Postal Service.

Over the past two months, cost-cutting directives have slowed postal shipments and threatened to leave mail undelivered, as the Postal Service's pandemic-period revenues sagged.

Jennings' announcement came at a press conference in front of a Wilmington post office Tuesday, less than a mile from where former Vice President Joe Biden will accept the Democratic Party's nomination for president Thursday.

It comes as several individuals have sued Trump, the U.S. Postal Service and its new postmaster general, seeking a court order to force adequate funding for the service.

The thrust of those legal challenges is that Trump and his newly appointed Postmaster General Louis DeJoy are sabotaging the service to ensure election mail is not reliably delivered. The plaintiffs include candidates for political office, people holding political office, as well as voters who say they must vote by mail for fear of contracting COVID-19, according to reporting from the Associated Press.

Election officials across the country are preparing for the potential that half of all voters will cast ballots by mail in November's presidential election.

In states like Delaware, applications for mail-in ballots are sent by mail to voters. They are then returned by mail, prompting the actual ballots to be sent and then returned by the same service.

Officials around the country fear that process could be undermined by changes to the Postal Service and see some votes left uncounted.

In Delaware, a local letter carrier reported that priority mail and first-class mail is intentionally not being delivered due to the policy changes, Jennings office stated.

"In my 40 years of working at the post office, you never delay first-class mail," said Robert M. Wilkerson, president of the Delaware State Association of Letter Carriers, a union representing postal workers. "Now it is almost an everyday thing."

Wilkerson said delays are not being seen at all offices, but some, where first-class mail delivery is being held back for days. Sorting equipment at one facility has also been sidelined, he said.

This comes at a time where they expect a significantly higher number of mail ballots than previous election cycles, he said.

"We are very concerned," he said.

One postal worker said it took him some two weeks to receive his mail-in ballot, a delivery that should have come in no more than five days. Another letter carrier said they've been instructed to leave routes, sometimes lagging hundreds of deliveries per day, Jennings said.

Residents of New Castle reported not receiving mail for upward of six days, prompting a local postmaster to cite recent policy changes implemented by DeJoy, according to Jennings' office.

"This is voter suppression; that's what this is," Carper said at the press conference on Tuesday.

Last week, Trump acknowledged his strategy of slow-walking funding for the Postal Service to make it harder to process an expected rise in mail-in ballots from those seeking to avoid in-person voting over COVID-19 fears.

"If we don’t make a deal, that means they don’t get the money,” Trump told a Fox Business Network on Thursday. “That means they can’t have universal mail-in voting; they just can’t have it.”

Since then, he has denied that withholding funding is a reelection strategy.

Last month, Postal Service officials issued a warning to Delaware's election officials, stating they may not be able to promptly deliver mailed ballots during the final days before the Nov. 3 election.

The warning marks one of several recent Postal Service crises that have erupted since June, when Delaware lawmakers, fearing the coronavirus' impacts on voters, passed a bill making it easier for Delawareans to cast their vote by mail.

For votes to count, Marshall said, absentee voters should mail their ballots by Oct. 27. He said the state must ensure voters receive ballots before the date.

On Tuesday, DeJoy's office said he would pause operational changes at the agency until after the November election after lawmakers expressed fear the changes would hinder the collection of mail-in ballots.

DeJoy is set to testify before the U.S. Senate on Friday and the House on Monday. In response to DeJoy's commitment to pause changes, Carper said, "Talk is cheap."

House Speaker Nancy Pelosi called the Democratic-controlled House back early from its recess to vote on legislation Saturday preventing any further changes at the Postal Service.

"We will be voting Saturday," she said.

After crime outbreak, police are silent on key details in Wawa carjacking arrests